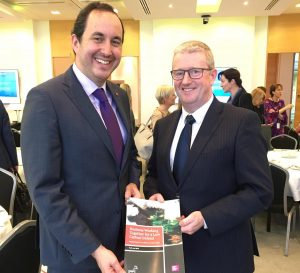 Along with almost 50 leading companies, we have signed up to halve our direct carbon footprint between now and 2030. According to PwC’s report on the Business in the Community Ireland (BITCI) Low Carbon Pledge ‘Business Working Together for a Low Carbon Ireland, these companies have engaged positively with the challenge and already secured significant emissions reductions of harmful greenhouse gases.

BITCI encouraged 47 companies to make the Low Carbon Pledge last year to act as a starting point in which companies can measure their efforts annually at cutting their carbon footprint and collectively make a public statement on their commitment to addressing climate change.

BITCI commissioned PwC to produce the inaugural Low Carbon Pledge report which sets out a clear baseline from which to chart future progress on the decarbonisation pathway utilising information provided by the pledge companies.

Signatory companies have committed to reducing their *Scope 1 and Scope 2 carbon intensity by 50% by 2030 and to report on their progress on an annual basis.  The PwC report states that pledge companies are making significant progress towards achieving the target decrease in carbon *intensity by 2030. The average emissions intensity reductions across the pledge companies was 36%.

Because of this initial significant intensity reductions over the baseline period to 2018, BITCI will focus on upping the scope and ambition of the 2030 greenhouse gas reduction targets. A critical challenge for companies will be sustaining such reduction efforts and focus on delivering further intensity improvements up to the 50% target and out to 2030 or an earlier date.

Welcoming the report, Business in the Community Ireland CEO, Tomás Sercovich, said: “Climate change is a reality and not a future-looking risk to be mitigated. Now that we have the data and concrete evidence, we have a strong mandate to mobilise more companies to make the pledge and raise their ambition towards decarbonisation. Investing in low carbon initiatives and engaging broadly in dialogue with policy makers, suppliers, employees and local communities will be critical to enable this transition to be successful.”

We’re proud to be signatory of the BITC Ireland Low Carbon Pledge and an industry leader on reducing our environmental impact.

Don’t miss out on news and benefits exclusive to Tesco colleagues! Log in or create an account today.